She got on the back of the truck with us. I looked at her red lips- was it betel nut?I looked at other women we passed on the road. The signs were definitely there.

To Western eyes, the habit of betel nut chewing seems very unpleasant The red lips can seem attractive, from a distance, but closer observation will reveal the stained tongue and decayed teeth. Then there is the spitting and hoicking on to the ground.

I needed to find out why this habit is so popupar.

Research revealed that people chew betel nut for its very pleasant taste and effect. Apparently, the betel nut induces a feeling of euphoria and well being. It creates feelings of general arousal and increased alertness, with increased heart rate and blood pressure, but the down side can be palpitations, sweating and facial flushing, along with a warm sensation in the body. They say betel nuts make people work harder for longer, and feel happier about it. So chewing betel nut has positive outcomes, which is no doubt why the habit has persisted, in spite of the negative effect on the body.

It is hard to see, however, that the disfigurement , staining, and damage, could ever be considered attractive. Is it possible that red decayed teeth and drooling lips could be appealing in any way? The answer is a surprising yes.The evidence comes from a new exhibition of exquisite Vietnamese pottery, which reveals that the  crimson cheeks and black teeth of betel nut chewing were hallmarks of female beauty in ancient Vietnam. Furthermore,  the curator of the National Museum in Vietnam describes the use of betel nuts as ‘symbols of social interaction, love and respect’.

A betel quid marks our encounter/To weave our relations forever.

A betel quid is a little package of betel, areca and limestone, often served with bark, cinnamon and straw. It would be kept in finely wrought boxes, and woven bags and  then served on trays. . In the National Museum of Vietnamese History, in Hanoi, there is currently an exhibition of exquisite pottery, all to do with betel nut chewing There are limestone pots and spitting pipes, and other paraphernalia to support the habit. For the lower classes, betel kits were made from ordinary materials like iron, wood, shell, rattan and cotton, while those for the upper classes were made from gold, silver, jade, copper, ceramic and brocade. All of them ,works of art reflecting thousands of years of chewing betel in Vietnam. The curator,  Le Thi Tuyet says that it is good to respect the agrarian values which have shaped modern Vietnam.The practice is enshrined in traditional poetry.

Today in Vietnam, betel nuts are still used in religious rituals, but the practice of betel nut chewing has largely retreated to country areas. It can be found in the hill tribes in mountainous northern Thailand, and throughout the villages of South East Asia. According to an article in the Fiji Times, betel nut chewing is an increasing concern in the Pacific. The negative health impact is the main reason for official discouragement of the practice, with documentation of rotting teeth, carcinomas, mouth deformities, and increased heart disease.

However it is still very common to see red mouth, back teeth, globules of spit and the beaming smile of habitual users, in the villages and mountains of South East Asia.

There is no hiding the evidence of betel nut chewing- it is there for all to see. The exhibition at the  Vietnam National Museum describes the betel kits as ‘reminders of our cultural identity’, from a time when beauty was more important than health. It is also quite common to see betel nut for sale at the markets, spread for locals and curious westerners alike.

A Westerner may view betel nut chewing as a disgusting and undesirable habit, but she does not have to look very far in her own history to find a similarly dangerous and antisocial practice which was once considered sophisticated and desirable.

You only need to look at photos of movie starts in the early days of movies to see the wreath of smoke and the elegant droop of the cigarette, to make the comparison. 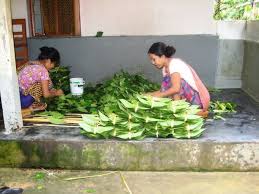 Attitudes to smoking, in the West, have changed significantly, as a substance once considered fashionable can become demonised and outlawed by public knowledge about its negative health impact.

The areca Palm, with its red betel nuts, is a very attractive, fast growing and widespread palm tree , seen both planted and in the jungle throughout Asia and the Pacific.

It seems to be very similar to the beautiful New Zealand nikau palm, which also has bright red berries. Some research on  http://www.doc.govt.nz/conservation/native-plants/nikau-palm/ revealed that nikau is indeed in the same family as areca, and that its berries do have a mild narcotic effect. Is there any evidence of nikau berries being used like betel nuts?

Travel experience with Roots of Asia   www.rootsofasia.com
Information about the National Museum of Vietnamese History from Heritage Magazine
Photos from Google Images